What do you get when you combine a music video director, a father of two, and an actor and underwear model?

One of the hottest and most interesting trios in country music right now.

I bet that's not what you expected, but yes, the band Midland is lighting up the country music landscape right now. Made up of Mark Wystrach (lead vocalist), Cameron Duddy (bass player) and Jess Carson (lead guitarist), the band just released it's debut album, On the Rocks (Big Machine), and it is fire. In fact, I loved it so much I sent a copy to my mom in Florida the day it was released, and have been listening to it on repeat ever since. 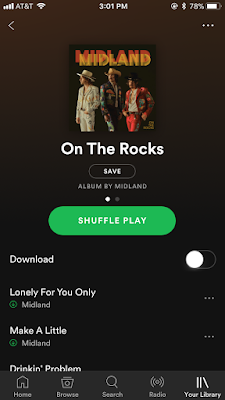 Drawing inspiration from the likes of George Strait, Gary Stewart, Merle Haggard and even the Eagles, it's no surprise this album has a throwback sound that will keep you tappin' your toes every bit of the way through all thirteen tracks. The band is even wearing Nudie suits on the album cover; I mean come on. It's a fabulous mix of 70s country and 80s crossover, yet is somehow still so modern, and I'm sure that can be partially credited to the other contributors on this album -- Shane McAnally, Josh Osborne and Dann Huff. No matter what kind of country music, or music fan you consider yourself, you'd be lying if you said you didn't love this album (or at least like it just a little).

Of course there's Drinkin' Problem, but my other personal favorites from the album include: Out of Sight (mom loves this one, too) and Somewhere on the Wind. I'm also a huge fan of how they so cleverly play on words with every track, but most obviously with songs like Altitude Adjustment and At Least You Cried. Though to me seemingly indescribable, the band says this is "music made for wide-open skies, endless deserts and wondering where the road is going to take you next" and I could not agree more.

If you want even more Midland, you can listen to their Spotify Sessions, which is where I first fell in love with their music (and it's got me dying to see them live). Lucky for me and all my little country concert-goers out there, you can see Midland on The Breakers tour with Little Big Town and Kacey Musgraves, but you'll have to wait until 2018!

P.S. Rolling Stone felt them coming, and also directed this article at me.