If you're still not impressed, Kelsea Ballerini has a head start on 2017 with two nominations for Favorite Country Female Artist (People's Choice Awards) and Best New Artist (GRAMMY Awards). She's creating a lot of first times for herself, for  women, for country music, and for women in country music (pun fully intended). #YouGoGirl

The first time I was introduced to Kelsea's music was back in March of 2015 when she opened for Billy Currington and that was when I knew I'd love her. To quote myself after that show, "Have you ever instantly connected to an artist after only hearing them perform just once?" Yes. Connected then. And still connected now.

I've been following her journey ever since, and I'm so happy to see how her career has taken off... Like when you fast forward to December 2 and Kelsea is headlining her own tour and selling out venues in New York City. 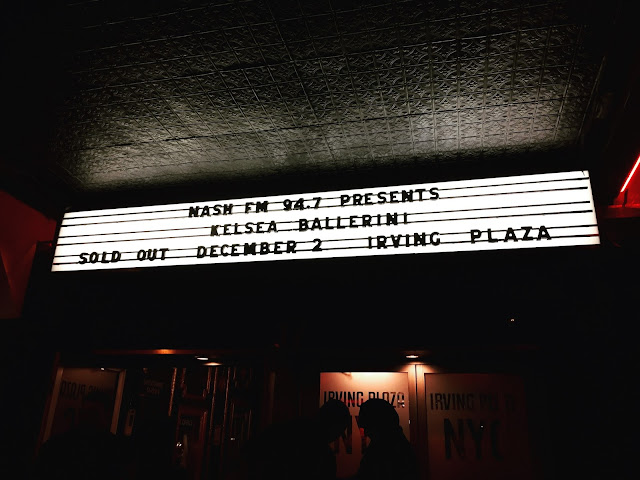 The atmosphere inside Irving Plaza was incredible. We were belting out lyrics as if we had written them, because we've all been there. That is precisely why Kelsea connects so well with her audience (aka me); we know how it feels to love someone or to have a broken heart, and she helps us put those feelings into words (cue Stilettos and Peter Pan). And I'll speak from experience, nothing is more liberating than shouting "you don't get to get to me" and "you're never gonna be a man, Peter Pan" with a room full of others who just get it.

So there we were, deep in our feelings, swaying to the music, realizing that tomorrow we'd have no voice, when... sirens. Nope, not the song; actual warning lights were flashing like lightning. Right in the middle of a new song about high school, the fire alarm went off and KB and her band cleared the stage. Despite all that we had been taught in high school, the crowd didn't move. I guess we all just wanted to dance in the eye of danger?

10 minutes of confusion, someone shouting "There's a first time for everything, Kelsea!" and she was back on stage. From Love Me Like You Mean It to The First Time to Dibs - if it was anyone's first time with Kelsea, it certainly won't be their last. Not only is "Country's Next Queen" a great performer and songwriter, she's also among the most humble and appreciative, and for that reason alone, no one deserves the success more. Keep it up, girl.

For all of you other KB fans out there, she told us she's working on a new album and I am very much looking forward to that.

I ain't staying down, tonight I'm going out
Yeah, even if I have to fake it
A little black dress to cover my mess
So you won't know my heart is breaking

**Full list of Awards & Nominations here.... because 2015 was also stacked.
Posted by Summer

Making Memories Of Us, With Them

It isn't news to anyone how much I love music -- we've been there a few times -- but one of the things I love most is its special relationship with the memory. Amongst many other things, music can be all transporting, captivating, uplifting, saddening, inspiring and motivating. It can make you feel things -- both new and old. It can change your mood. It can transport you to another place and time, for better or for worse. Music always leaves an impression, whether you realize it at that moment or not. 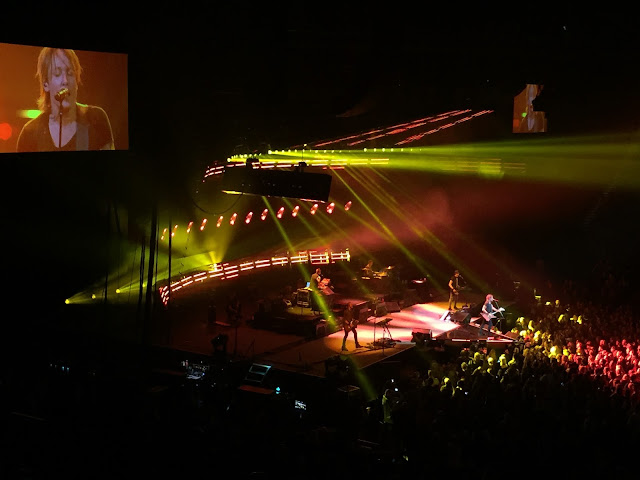 Keith Urban is an artist I grew up listening to -- Stupid Boy, Somebody Like You, Raining On Sunday, and You'll Think Of Me were my jams. Hearing those songs will forever remind me of the way I felt the first time I heard them; spouting his lyrics at the top of my lungs while driving with the windows down; and the bond Keith's music created within my family. So, you can probably imagine my excitement seeing him in concert for the first time.

I don't know if it's because it was the final stop on the Ripcord Tour, but my experience that night was unparalleled. I'd always heard Keith Urban put on a great show, but this was more than great. He had a stage presence like I'd never seen and at the start of each song I'd lean over to my friend and say, "OMG, I love this one!" ... "This one, too!" (How is it that even after a number of years pass by, a song comes on and somehow the words just roll so easy off your tongue? The memory, man.) To say he's a remarkable performer would be an understatement. He belongs on the stage. And there isn't even a shred of doubt in that statement. Who wouldn't wanna be him?

Maren Morris had me feeling like I was at Bonnaroo all over again (sigh). She also reminds me so much of Miranda Lambert, and apparently I'm not the only who thinks so because she sang We Were Us with Keith, and crushed it.

And when it comes to Brett Eldredge, I could go on and on, and on and on, all day long. Just thinking about his voice right now gives me chills. Would it be a stretch to call him a modern day, country Frank Sinatra? He also knows just how to make a woman feel special. Throwing flowers out into the crowd, Brett? You really do want us to be drunk on your love, don't ya?

Most valuable play of the night -- Keith's and Brett's duet of Somebody Like You. During the end guitar solo the entire arena was jumping up and down like they were on the stage. That was quite a liberating moment for me and I can still feel the thrill of it now.

Wow. What a night.

And now for my obligatory see what I did there moment... It certainly wasn't wasted time, but it was definitely time well spent.

If you're into reliving moments like I am (and jogging that unbelievable memory), here's a playlist that will take you back to that night -- or just help you pretend like you were there.