Yeah, It's A New York Summer

Right now I'm sitting on a plane to San Francisco (yay Outside Lands!) - it's cold, a baby is crying, the guy behind me keeps kicking my chair and I've still got about 4 hours left. There's nothing I want more than to be back at Madison Square Park, dancing, singing and vibin' with Jake Owen.

Blankets, beer, and bodies filled the lawn at Madison Square Park last night, making New York feel just a little bit more like home. There were die hard Jake Owen fans (like the father son duo I met that had flown all the way from Florida just to attend). There were country music aficionados. And other people were there just hoping to have a good time. It was a beautiful night, and the palm trees, flamingos and sunglasses that covered the stage made it feel exactly like summertime should.

Because the concert was free and in a very public setting, many people had just stopped by to see what all of the hype was about, asking "Do you know what band this is?" One man even had the nerve to tell me I don't know what country music is. I politely avoided that argument. Why is everyone always trying to put country music in a box? But I digress, and that's a post for a different day. No worries Jake, if they ain't gonna love you then I sure will. 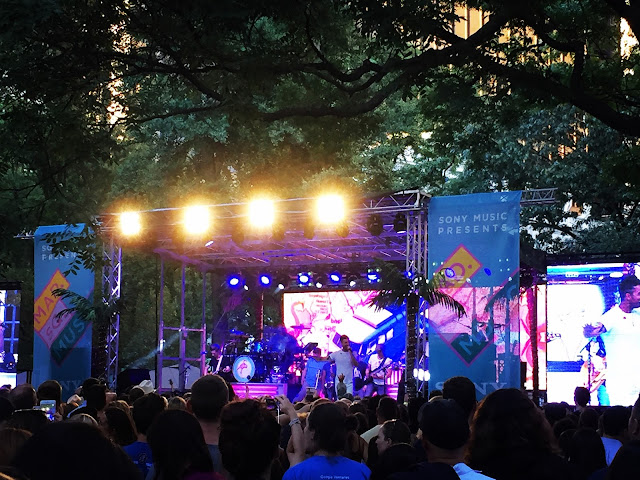 Other than a wonky sound system (which you could tell JO was struggling with), the concert was pretty great. There was a nice mix of both old and new songs, but my personal favorites were Alone With You, The One That Got Away, Beachin' and Anywhere With You. His recently released American Love album has a beach-funk feel to it, and is beautifully named (because we could all use a little more love). One of the tracks, LAX is about an LA-X that apparently broke his heart (come on, who in their right mind would break up with that guy?) and it's all kinds of feelings. Covers by Drake, Beyoncé, and Joe Cocker made the outsiders not feel so outside, and a U-S-A chant made the country fans feel right where they belonged (is it really a country concert without that inevitable cameo?).

Jake Owen's even more handsome and kind than I imagined, and I'd highly recommend attending a show of his if you haven't yet. Shout out to the Madison Square Park Conservancy and Sony Music, because even though I think they've got some logistics to work out, this event was pretty cool. And who doesn't love a free concert?