It probably goes without saying that I have been to more shows than I can count. I have seen some phenomenal artists put on some amazing concerts. I have felt all of the feelings and incurred many (many) days of the post-concert blues, but not one of those shows has ever made me feel the way I do tonight. 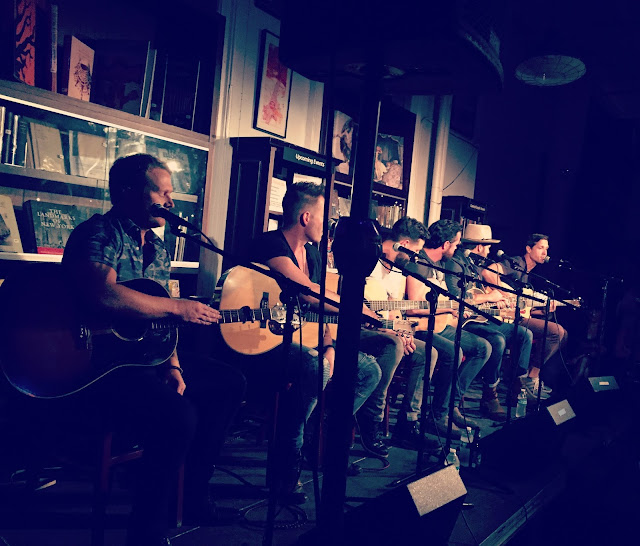 Tonight I got to sit in a bookstore with six of the best songwriters in country music and listen to them play their songs. Walker Hayes, Drake White, Brad Tursi, Matthew Ramsey, Trevor Rosen and Shane McAnally. You might recognize a few of those names if you're into the band, Old Dominion (or maybe you just read my countless blog posts about them), but even if you think you're not familiar with the others, you've most definitely heard their words on the radio.

The writer's round at the Housing Works bookstore tonight allowed each artist to sing four songs, but that just skimmed the surface of all the music they've written. These guys are killing it in Nashville and they gave us some of the stories behind their hits. We heard: Back To Free, Song For Another Time, Follow Your Arrow, Sangria, A Guy Walks Into a Bar, and Lela's Stars (and some really, really, really great new ones), just to name a few. Life, love, memories, dreams, broken hearts, feelings, children, lovers, haters. These guys were not just singing songs they've written, they were singing songs they've lived. And that's what makes all six of them so unbelievably special.

The chemistry in the room was off-the-charts - you could tell how much they all appreciated each other's music. But man, the back-and-forth banter. I've never laughed and also wanted to cry so much in one night. My face still hurts from how much I was smiling (now I guess I know how Brad feels). Ah guys, it would take a much longer post to truly convey how special this night was - I mean I could go on for days about how incredible Drake White's voice is (just wow). I would take a show like this ANY day over a big concert hall or stadium. This is where memories are made. This is where fans and artists alike all get the chills. This is where writers like Matt Ramsey say "That was my favorite time I've ever played that song." Isn't that what it's all about?

Not many people get to attend as many concerts as I do, and for that I already feel so grateful. I am so lucky. I am so fortunate. But mostly, I am so inspired. Thank God for country music, and for the people who are bold enough to chase their dreams and spend their lives writing it. To whomever takes the time to read this - never, ever, ever stop following your dreams. These guys didn't, and I'm not going to either. Nashville, I'm coming for you.

And if that doesn't inspire you, please read Walker Hayes' story.

Lots of reason just to give it on up
Leave your soul on the shelf collecting dust
Live in a world of broken promises and empty tanks
Aw, but look at us

**All of the profits from the evening go to Housing Works and its efforts to fight AIDS and homelessness.
Posted by Summer
Newer Post Older Post Home