Kenny Chesney, He's Got It All.

Well the fact that I'm still breathing means that I must have survived. (And that I lived to go out with Old Dominion again Wednesday night).

I literally cannot think of a more amazing show. Old Dominion, Cole Swindell, Brantley Gilbert, Jason Aldean, AND Kenny Chesney? Now that's a boys club I didn't mind being a part of, and I wasn't the only one feeling this way. There were records broken to prove it. According to MetLife Stadium, Kenny Chesney was the "highest selling Country music artist OF ALL TIME in New Jersey" with 58,642 fans in attendance! That should certainly make him feel like a rock star. 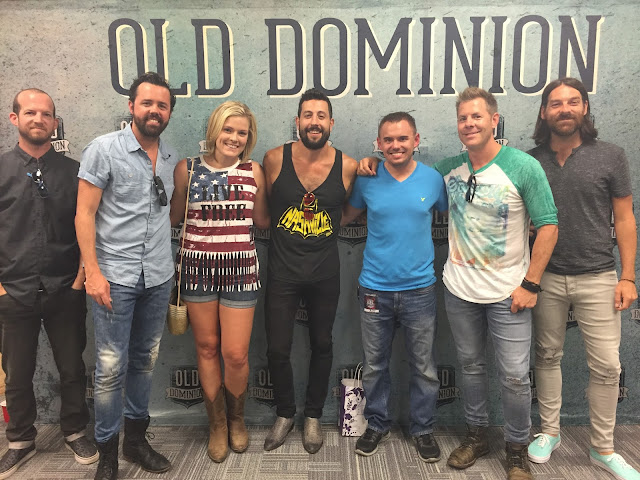 Kicking off the party first was the wonderful and talented country rock band, Old Dominion (you can see us hangin' like a pair of dice above, thanks to Tunespeak!). If you happened to catch them, you made all the right wrong turns that night (or should we say afternoon? It was 4:30 afterall). Though the stadium was empty (because at that point most of the fans still had beer on their breath in the parking lot), it didn't seem to bother them one bit. They were probably so caught up in how it felt to play at MetLife (uh, I would be too)! Don't know the guys? Break Up With Him or Shut Me Up should ring some bells, But if not, co-writes Chainsaw, Wake Up Lovin' You and Say You Do certainly will. No pressure, whatever, just do what you gotta do, but if I was you I would check them out.

Old Dominion let the night do what it does best, rockin' all the songs from their EP, but the set was entirely too short. Even though sweat was pouring down my back, I was singing along to every word, wanting nothing more than for them to keep playing. And I know it ain't my business to be all up in, but y'all think any of them are single? Let me stop. Thanks Matthew, Brad, Trevor, Geoff and Whit... y'all are awesome! Any time y'all wanna rock with me, I'll roll ;)

*Caution: If you plan on reading the rest of this review, you'll need a cold drink, cause I'm a hot mess. 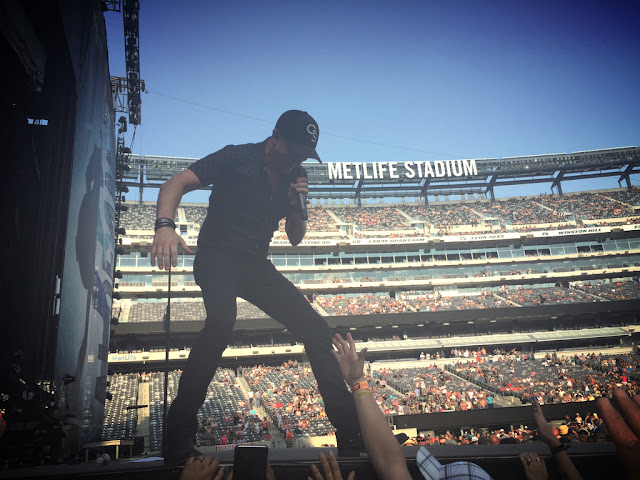 All the worries in the world? They were gone. Because just as there was a little sun left to burn in the blue sky, we started kickin' it country style with Cole Swindell. The place was getting more packed and the drinks were flowing. From where I was standing, there was nowhere to go (literally), but there was nowhere else to be. Long as I'm rocking with you, Cole, you know I'm cool with just chillin' it.

Came out to have a good time? Then you were at the right place. If you've seen him before (or read my NASH BASH review) then you know that he's just like a miniature Luke Bryan. Happy as can be, the man was tearin' that dance floor up. He's such a fun artist to see live. No wonder he won New Artist of the Year at the ACM Awards. Well deserved, buddy.

Cheers to a good country song... that you can sing to your ex. The crowd was singing from the bottom of their broken hearts because baby, you just ain't worth the whiskey. Hey Y'all, Let Me See Ya Girl and Hope You Get Lonely Tonight were amongst the other fan favorites. And Brought To You By Beer... don't remind us, Cole - that's still a touchy subject. I think it's safe to say Cole had a night with our names on it. 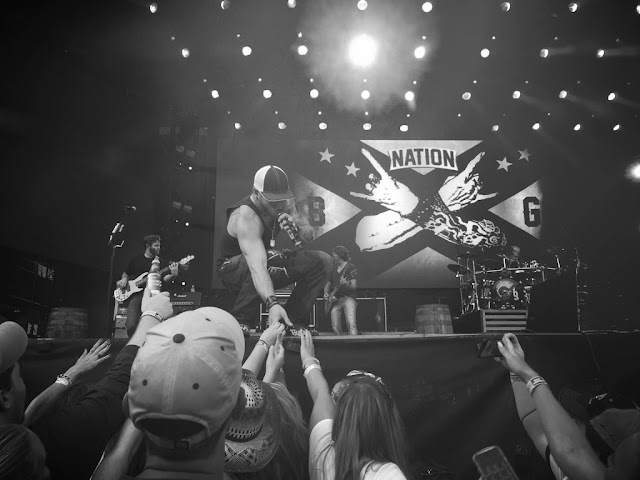 If you want a bad boy, then baby you got it. Brantley Gilbert is the definition of a country rebel, and I just love it. Seeing him perform was a moment I'd long been waiting for, and I finally got to cross it off my bucket list. I was in the front row singing along (because I'm all about the country sound) and I never thought I'd be one to bang my head up and down at a concert, but it may have happened a time or two during his set (I can't lie. I'm guilty!). Sho'nuff was a good time.

If Old Dominion and Cole Swindell didn't do the trick, Brantley sure did. One Hell Of An Amen, Small Town Throwdown, Bottoms Up ...you name it, he played it. Read Me My Rights was probably the most intense, though he did make it clear to the crowd that if there was to be a fight, to take it outside (thanks for that BG). Not sure if he can still say he ain't close to famous, but you can tell he loves to play and sing. MetLife certainly isn't a honky tonk, so I'd say he's living one hell of a dream. Let's give a toast to the good times. *Raises beer*

For all those who are wondering, there ain't no doubt in my mind that country IS country wide. And I will continue to say that as long as I'm feelin' like I was that night. Looking around at the people rockin' out to BG confirms the fact that it ain't where, it's how you live. Can I get an amen? 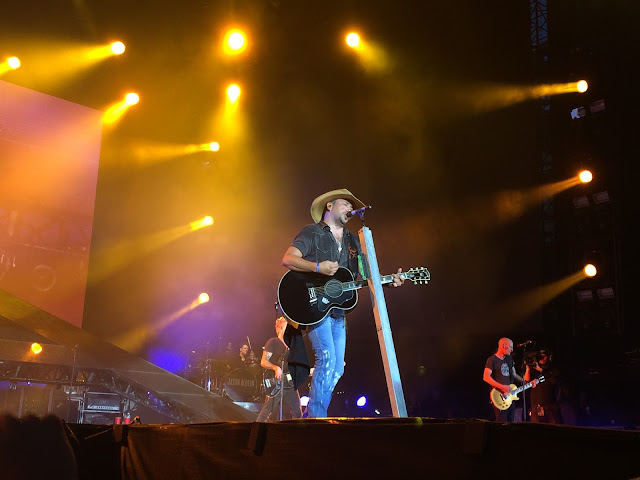 Jason Aldean sure left his mark on us, and we can only hope we left our mark on him, too.

I first saw Jason back when he was on Trace Adkins' tour with Billy Currington in 2006... I'm talkin Hicktown and Amarillo Sky (which are still crowd faves). It was nice to see him again with just slightly better tickets this time. I couldn't wait for him to get that thing started. JA is my kinda party. 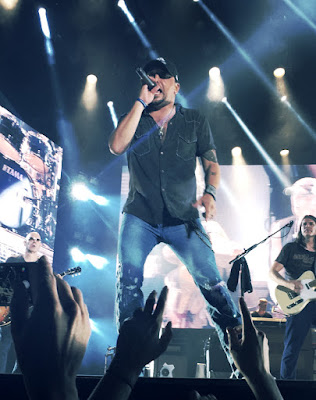 If you're a concert junkie like me (or even if you're not), you know that each artist has their own unique performing style. Compared to many others, Jason is one of the calmest and most seemingly confident I've ever seen. How he manages to get the crowd so pumped without bouncing up and down is beyond me. From Burnin' It Down to Crazy Town, he was just doin' his thing (oh how we love it when he sings). Add some fireworks and flames, and you have yourself one wild night. But that's the way we get down.

Take a moment to think about this... other than in your car or the shower, where else can you belt out the words to a song at the top of your lungs without being judged? The answer? MetLife Stadium with 58,000 other people. Sure, any song will really do, but there's just something about The Truth that brings a crowd together. It's like one giant therapy session. "The truth is that I'm askin' you to lie, and we both know that it ain't right..."


From the songs he plays to the prays he prays, that man is country. And I just gotta tell you, Jason, that night looked good on you. I have one question though, why oh why didn't you play WHY? Oh well, long as I'm with you it really don't matter. 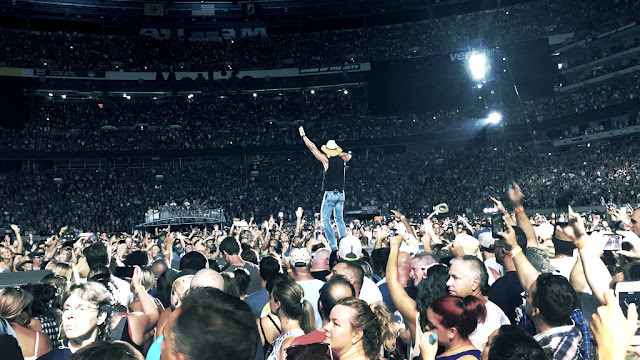 And then, everything got hotter when the sun went down. Which seems impossible considering the temperature read 93. Ah, sweet summertime. It's safe to say that I've done some livin' and I've had fun. But there is one thing that I haven't done, and that's stand front row at a Kenny Chesney concert (and I've never wanted nothing more). One more night of that that would surely kill me (but holy bucket list!). 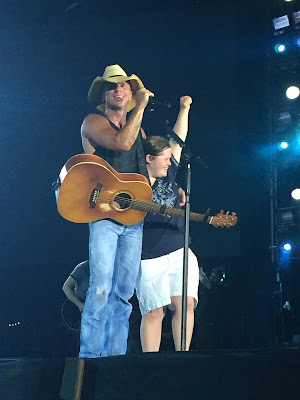 We all have a song that somehow stamped our lives, takes us to another place and time. I Go Back does it for me, and was probably my favorite of the night. Mix in Anything But Mine, Living In Fast Forward, and Young ...and man, that's the good stuff! The crowd once again connected during emotional songs, Somewhere With You and You And Tequila (it's always our favorite sins that do us in). At one point, Kenny brought a girl up on stage and fulfilled her dream of kissing him on the lips (YEAH), which showed us his softer side.

It's amazing when you think about just how many hits Kenny has, but it also makes it pretty impossible to hear every one you wanted. I was waiting ALL NIGHT to hear a song that he was apparently saving for a rainy day (hint hint). Perhaps the sun was too bright or the sky was too blue? Ugh. Guess I'll just sit right here, and have another beer in my apartment to melt these blues away. As KC would say, a drink or two is a foolproof remedy, and he's sure worth drinking to. Also, can we get  a hell yeah for his amazing female bassist?

Man I don't know, where the time goes, but it sure goes fast, because before we knew it, it was time for the encore. Both Kenny and Jason sang She Thinks My Tractor's Sexy and The Only Way I Know, and then the highly anticipated Summer of 69... which was phenomenal. I struggle sometimes to find the words. There was also a moment when I was sure Kenny and Jason were looking straight at me, and that's something that just don't happen twice. 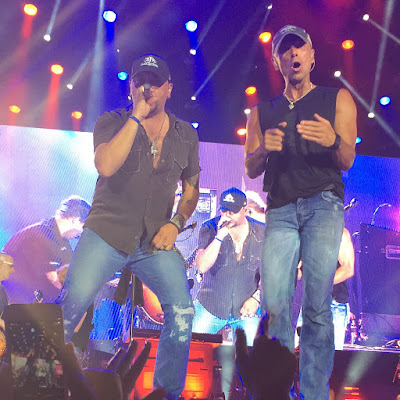 We raised a lot of hell in the no shoes nation that night and I can't say we had a whole lot of cares (because there's only so many times you get to feel like this). But oh how we prayed it wouldn't end. It all may seem like a blur now, but I do recall wishin' time would stop right in it's tracks.

Ah, goodbyes are like a roulette wheel. You never know where they're gonna land. I just wish it wasn't over! It was honestly one of the best shows I've ever been to, and it was evident that everyone in there felt the same. How are we feeling now, you ask? We may be a little messed up, but we'll eventually be alright (I hope).

Check out Instagram to relive the night over and over again.

One life, one chance
One ticket to the big dance
You and me still holding on
Right down to the last song