Country In Brooklyn... Brought To You By Beer

NASH BASH in Brooklyn was the place to be last night. There may have been more empty seats than filled ones, but c'mon guys, it's quality not quantity. And those of us that were there were swayin' and prayin' that Cole and the band didn't ever stop playin'. 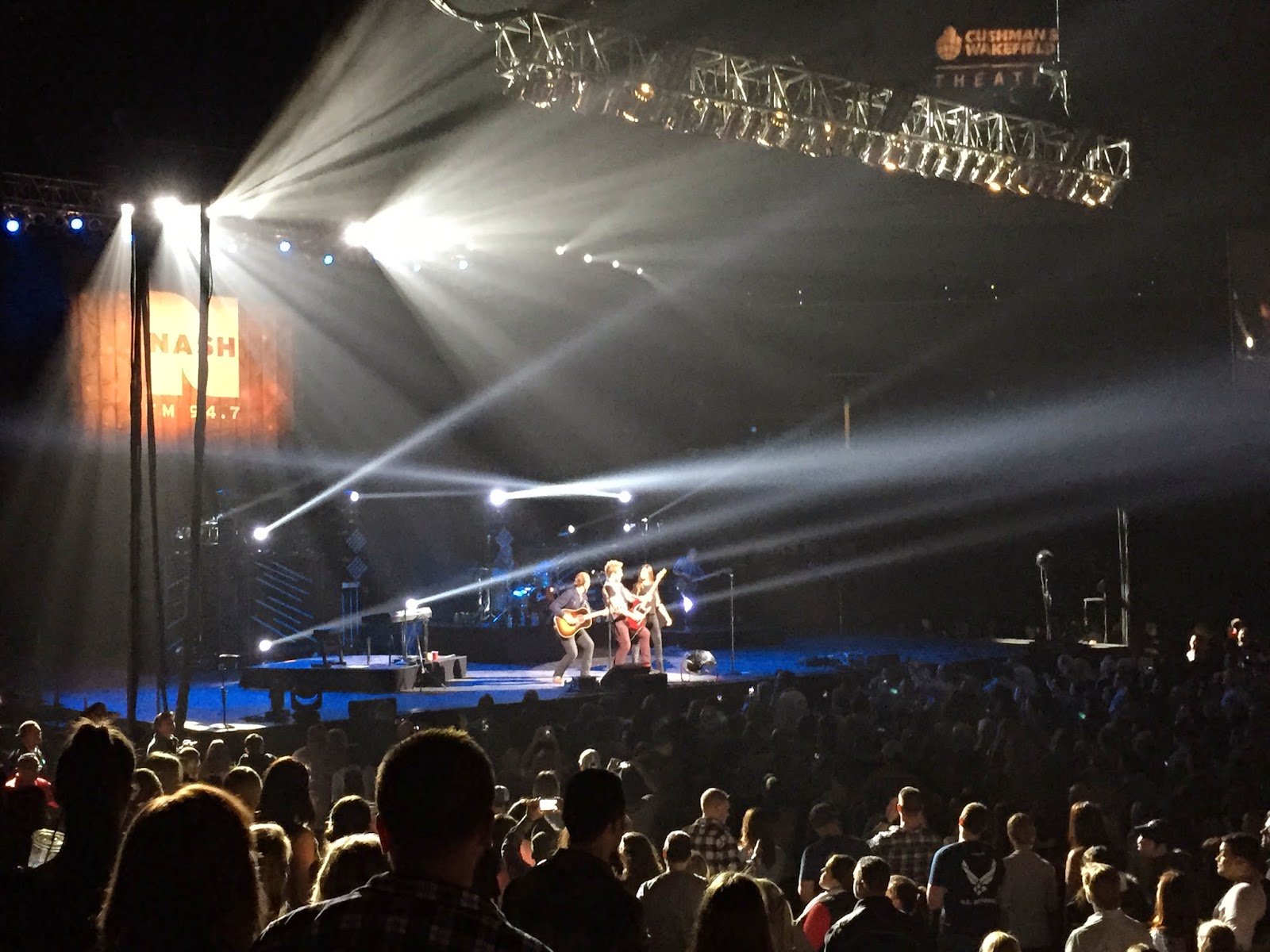 Amongst the openers were Jana Kramer and Gloriana, but to kick it off was Michael Ray, who by the way is not all that hard to look at (and what a great way to get us in our seats). You might recognize his name from his hit song right now, Kiss You In The Morning. I hadn't heard any of the others, but he won us over with Dust On The Bottle, which is always a fan favorite.

Jana Kramer was as fierce as could be. She stunned us with some killer heels and a hott outfit, but she'd look great in just about anything. I'm sure the guys were wondering why she had to keep making them want her too. Jana was belting it out seriously hard for Love and a little AC/DC All Night Long, but to me, nothing was better than her beautiful voice during some of the slower songs. Jana, I still believe in love too.

And Gloriana's set made me wonder why they are so completely underrated (Tom, Mike and Rachel really are wild at heart). Some noteworthy songs were Can't Shake You, [Kissed You] Good Night, and Trouble, which brought everyone to their feet. I don't know why I haven't paid more attention to them, but I certainly will now (and you should too). 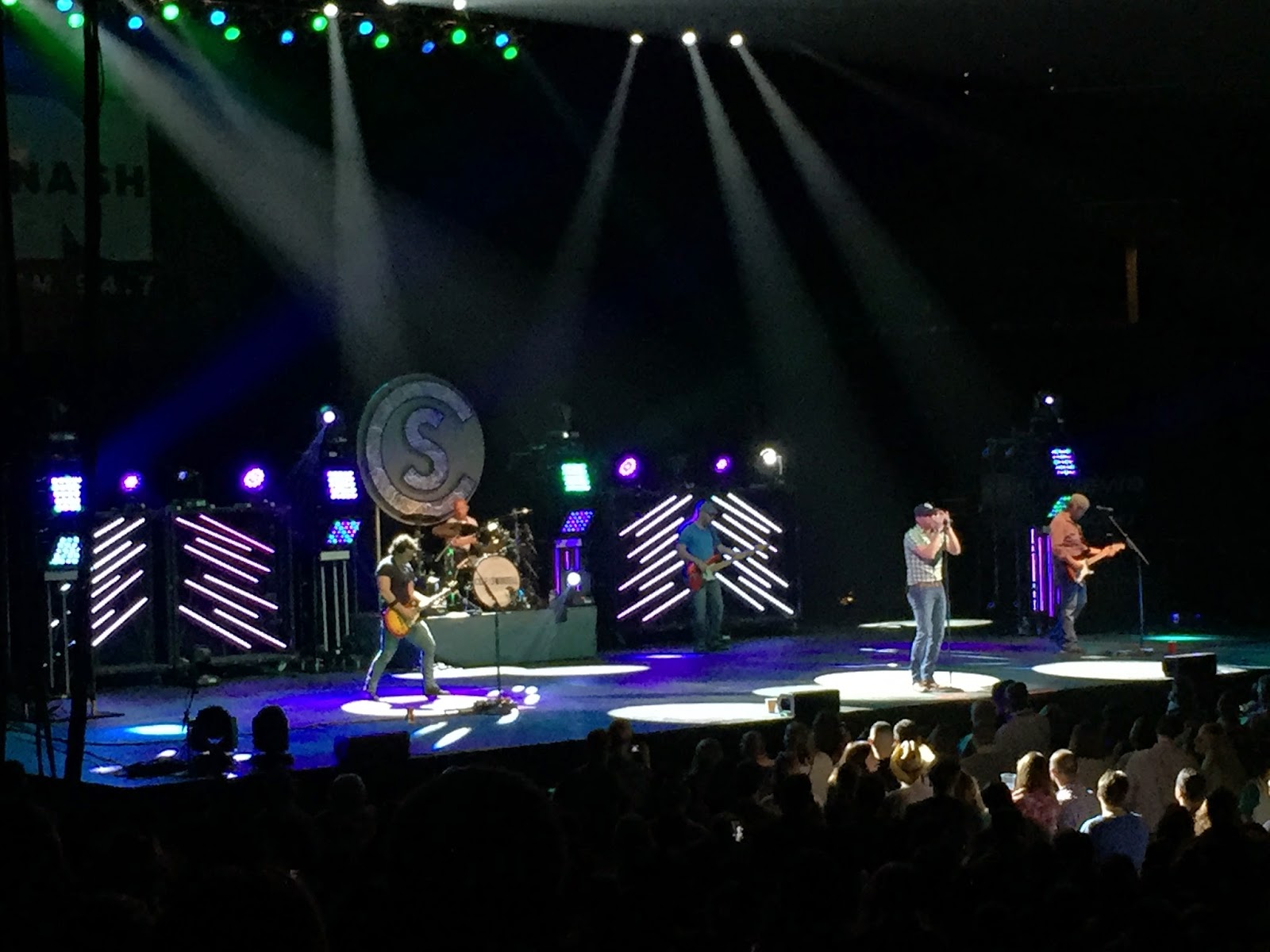 Cole Swindell was like something straight out of a country song. That man is a Luke Bryan in the making (from his voice to his moves) and he sure knows how to shake it alright! I'm pretty sure I said multiple times last night how adorable he is.

Of course CS played all his popular tunes: Ain't Worth The Whiskey, Chillin' It, Hope You Get Lonely Tonight (and then some). Something you may have in common, he's a big Tim McGraw and Dierks Bentley fan (but really who isn't?). BBQ Stain and What Was I Thinkin' were hits with this Brooklyn country crowd. It felt like we were somewhere between the back roads and the back row.

Not only does he put on a fabulous show, Cole is also quite impressive off the stage as well. He writes music for himself and many others in the country world (Get Me Some Of That by Thomas Rhett, This Is How We Roll by FGL, Roller Coaster by Luke Bryan - all of which he performed last night - and so many more). 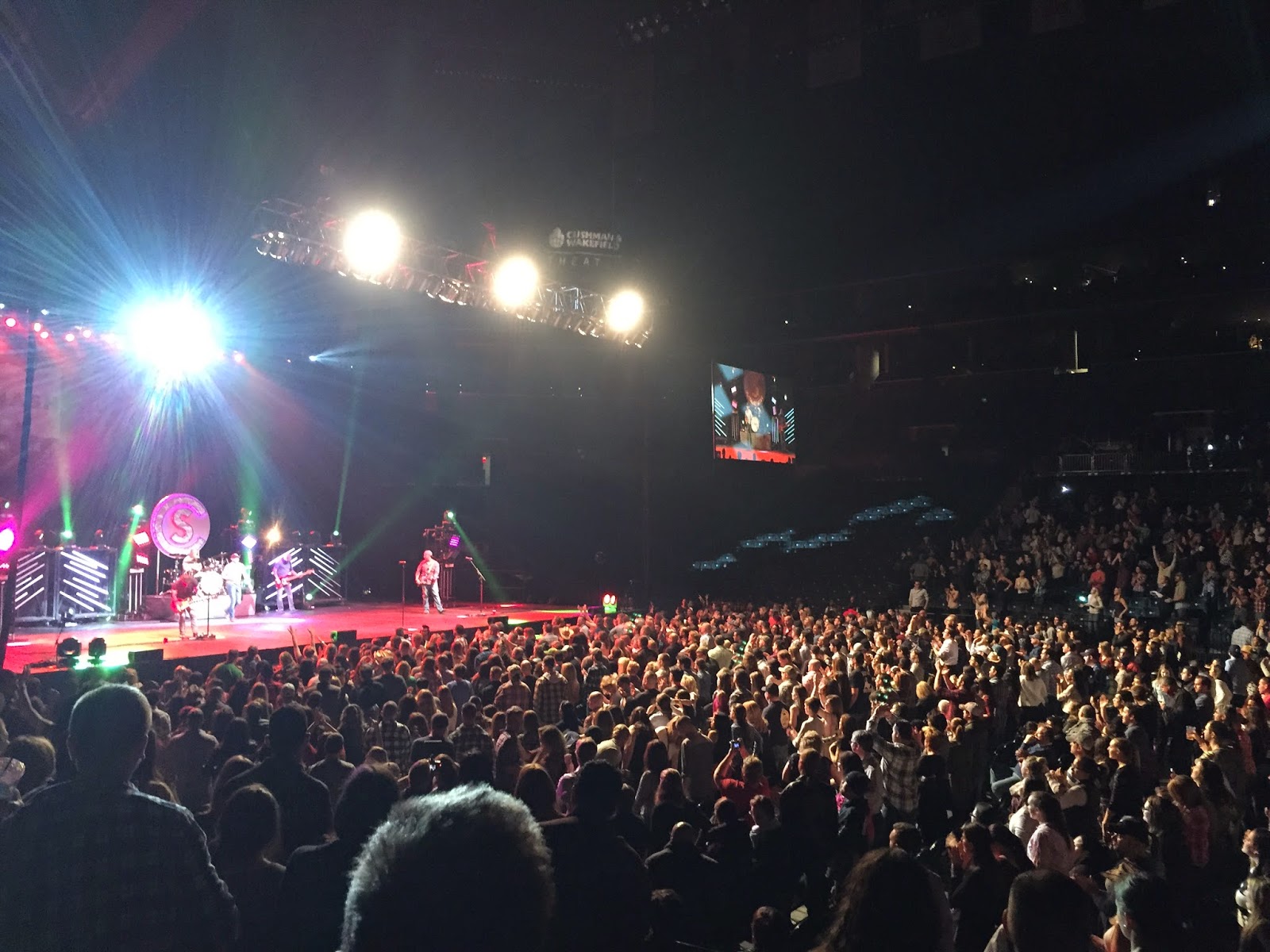 Anyone else at the show would probably agree that all the worries in the world, they were gone. I mean, some drunk dude was even in the crowd yelling, "Let's get weird, y'all." Ok, not really, but I'm pretty sure there were many moments that could have only been #BroughtToYouByBeer (or maybe it was the whiskey? Who cares). Cole may not be able to fill Barclays Center just yet, but I wouldn't be surprised if he starts selling out arenas in the next few years. Thanks for letting us chill it with you, Cole :) 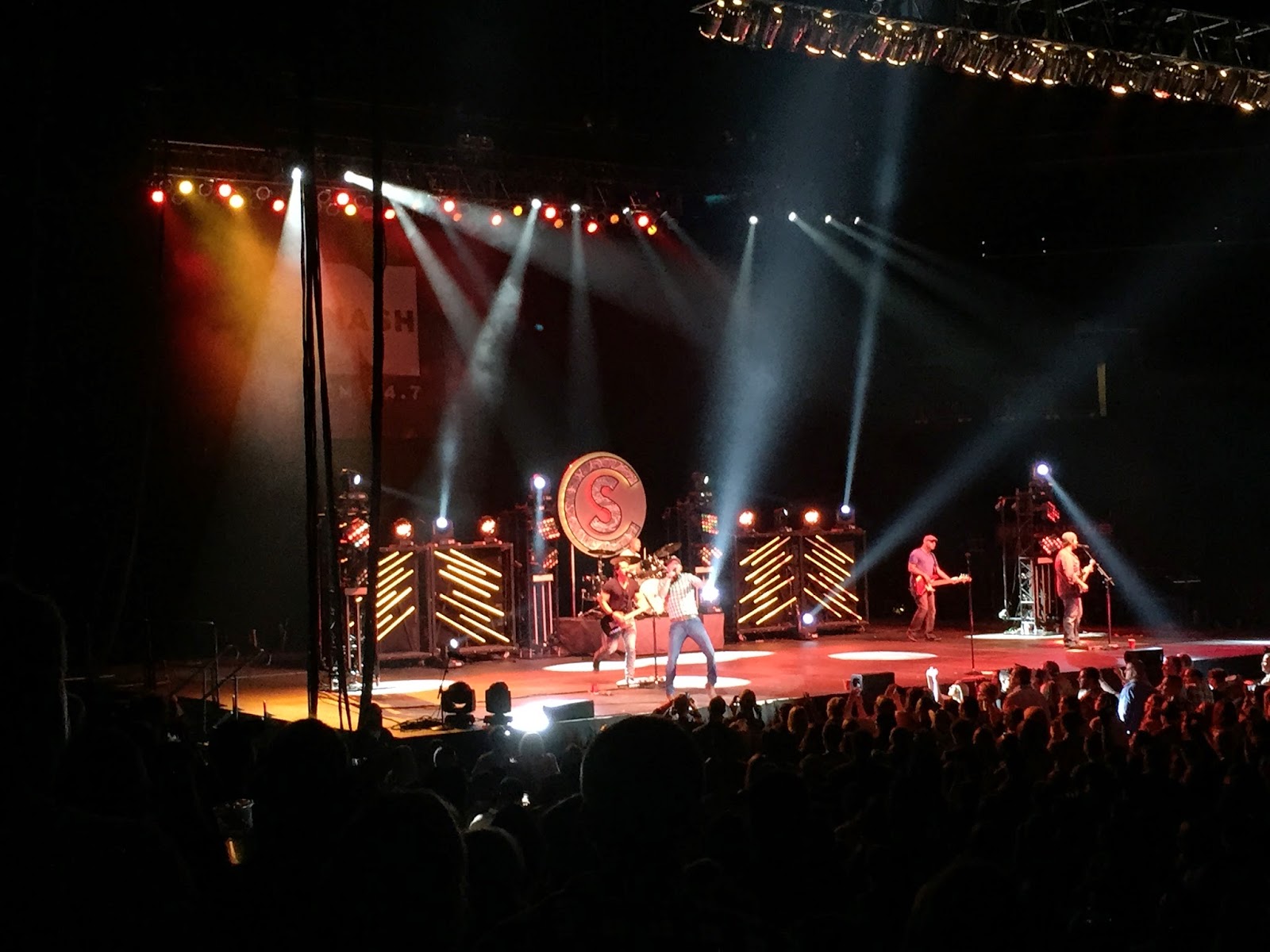 Tyler Farr was at Starland Ballroom recently and if you weren't there, here's what you missed: 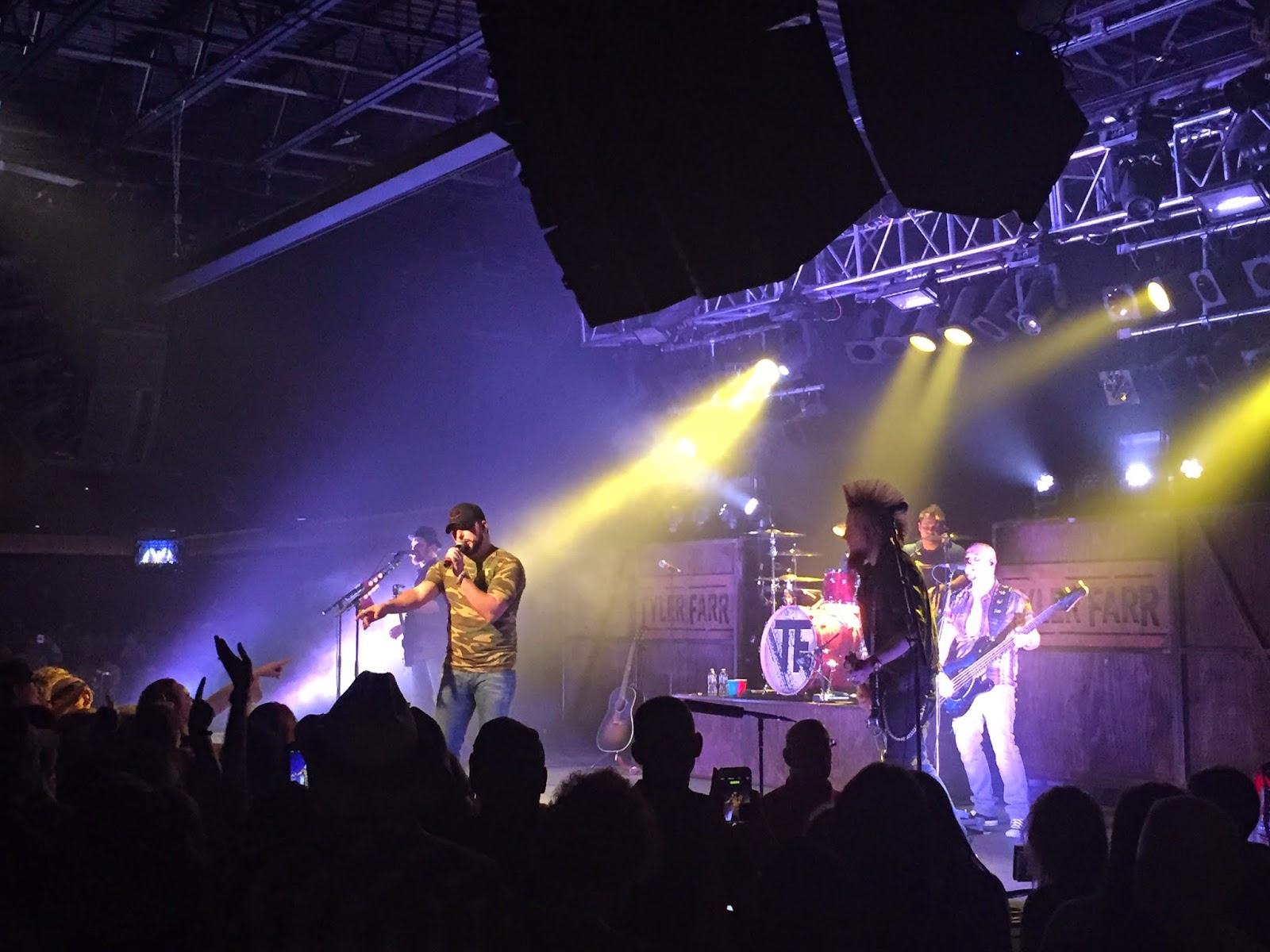 Get a little redneck crazy. Add some whiskey to your water. Throw in a little dirty talk (thanks to the woman who threw her bra up on stage). And you're all caught up. TF sang an acoustic version of Hello Goodbye (which was phenomenal). I really felt that true emotion, but half of the crowd was hardly paying attention and I could hear them talking over most of it. The problem you ask? Maybe they weren't even drinkin'. Okay, that's a lie. But shame on y'all! 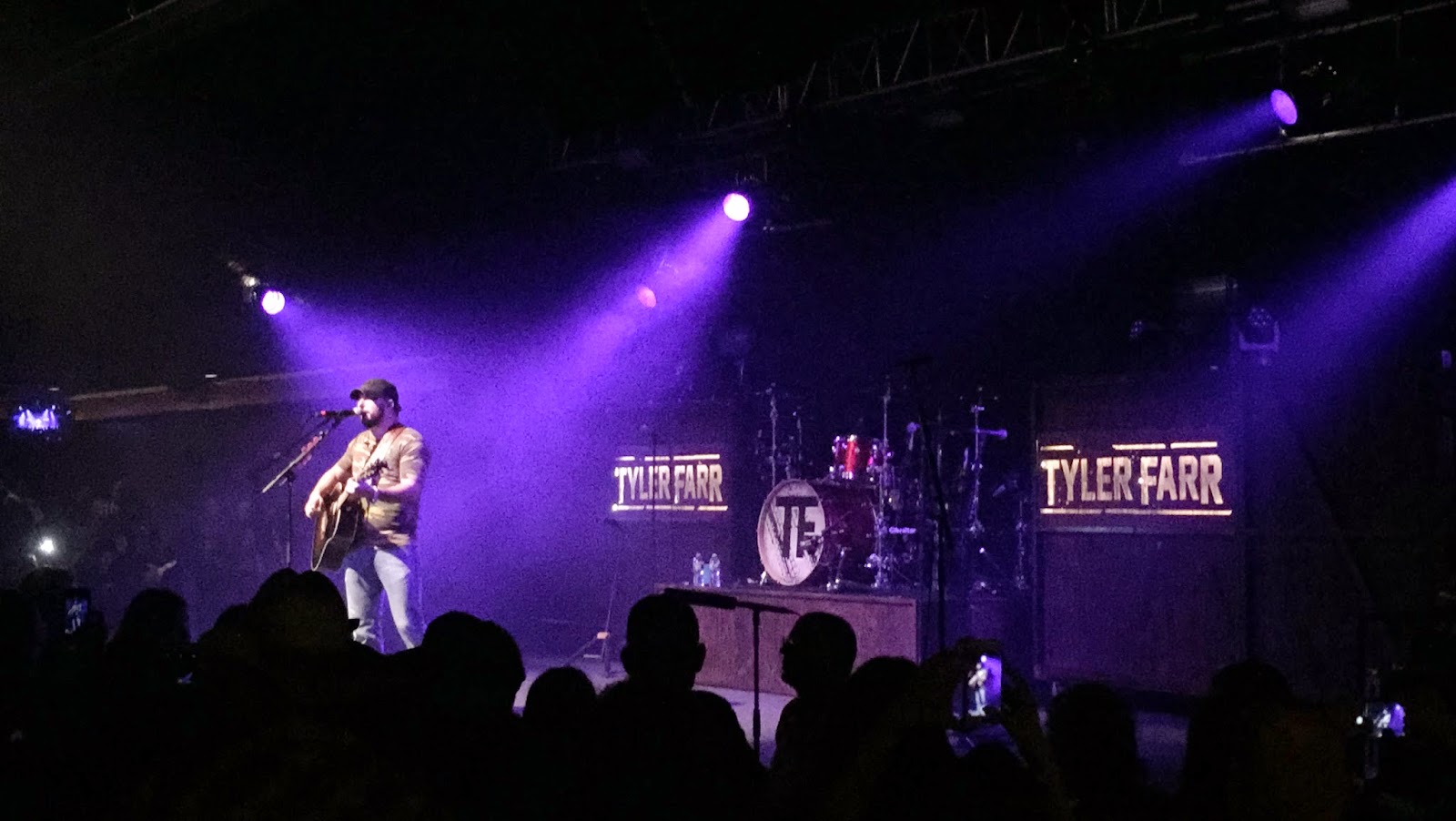 While it wasn't quite as much of a party as some of the other shows I've seen, I thoroughly enjoyed it. He may not have been dancing around the stage like Thomas Rhett, but I was entertained and I respect his style and ability to sing. I also have to mention his cool setup. The way his name lit up came from a shadow box of sorts, so no matter what the lighting was like during each song, you always had a clear photo (above). 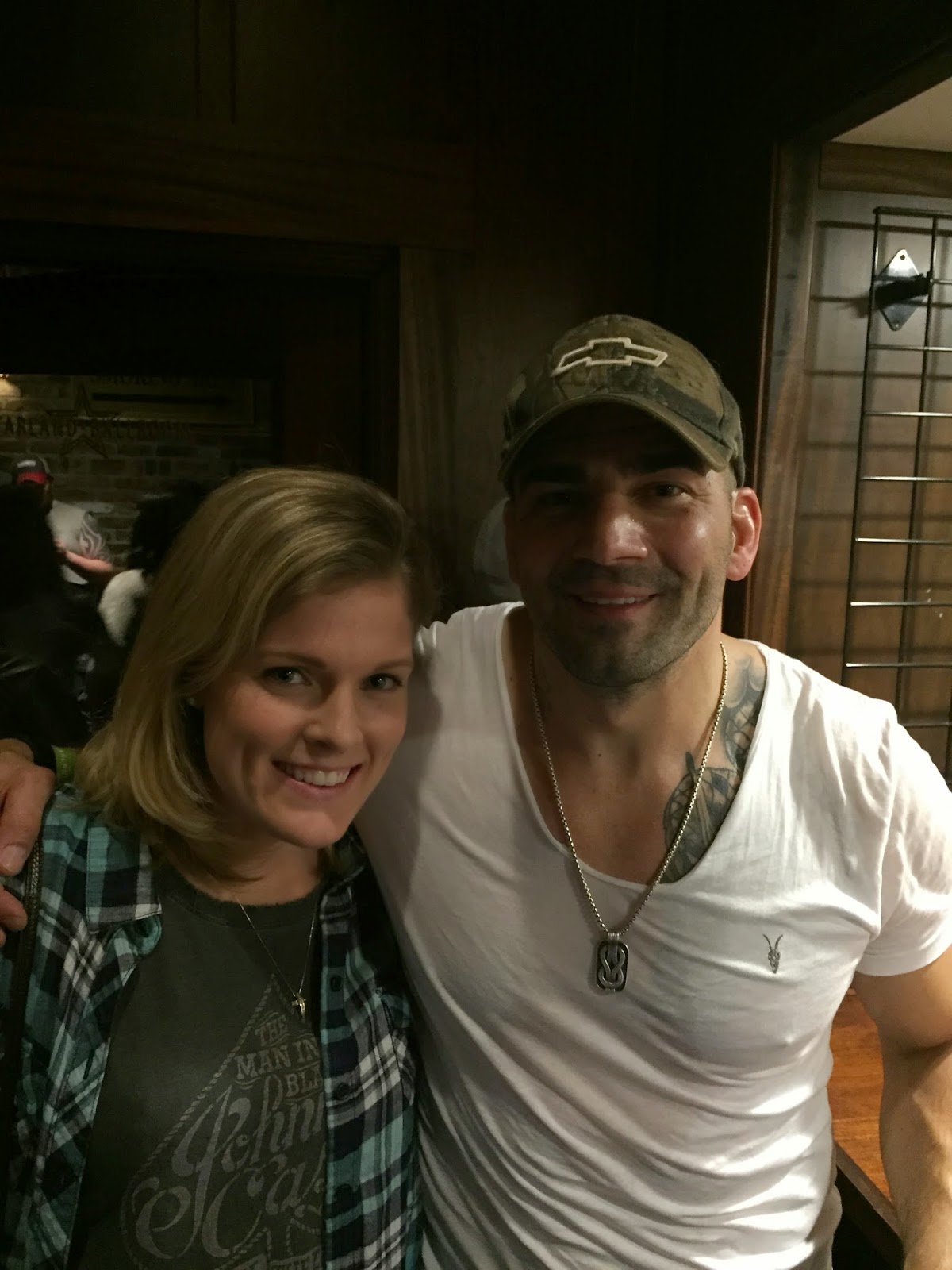 The opener, Scott DeCarlo (pictured above) was pretty impressive as well. And get this... I talked to his photographer after the show and he said Scott only does this part-time. He has a full-time job and plays local venues in his free time. Now THAT'S dedication. Best of luck to you, Scott! 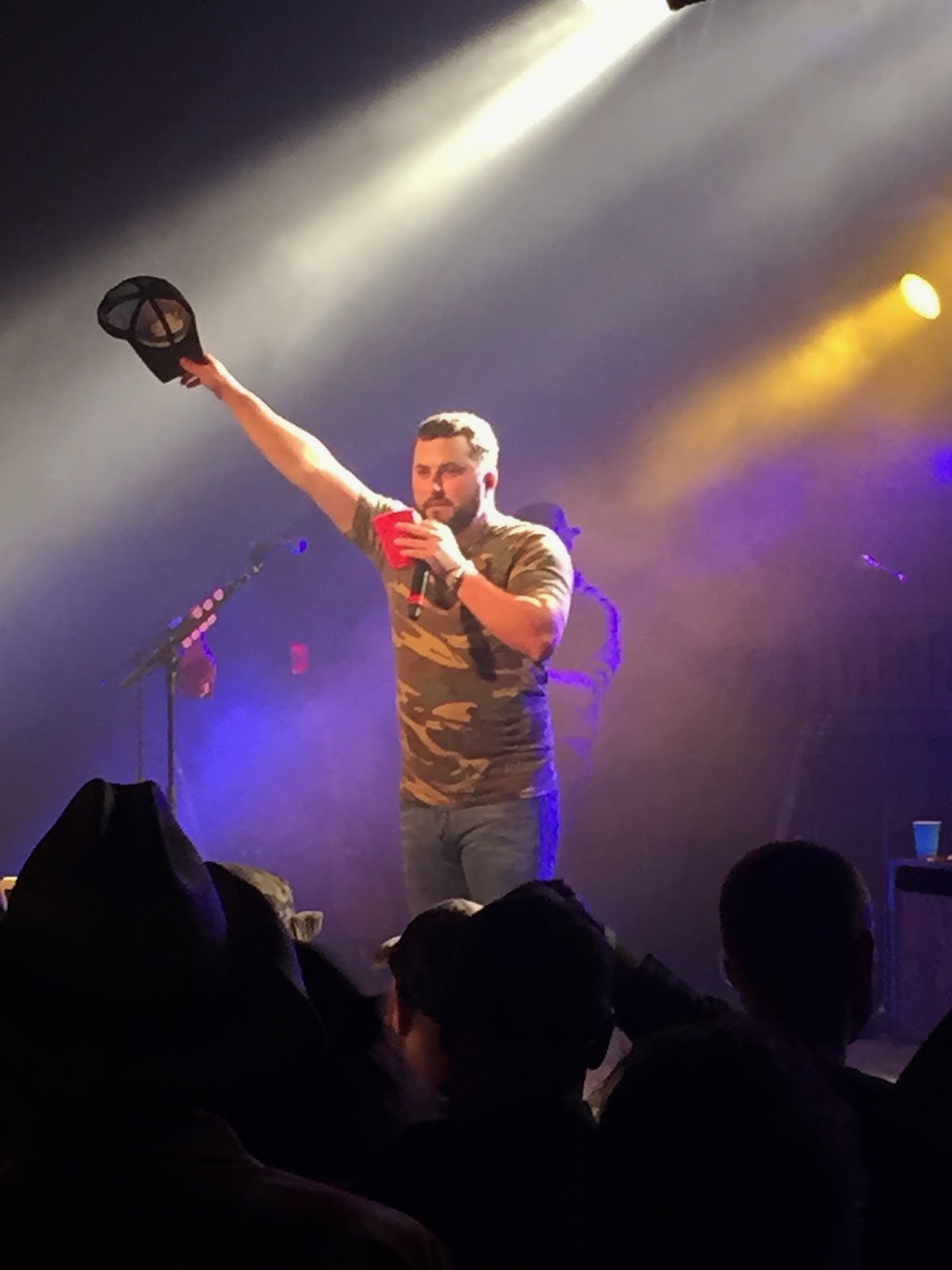 And just like all good things.. it had to come to an end. We barely even said hello before we had to say goodbye. For some of you lucky dogs, you'll get to see the guy walk into a bar again on April 28 at Irving Plaza. Just don't forget to pay attention this time.

Billy Currington Knows What To Do With A Friday Night

Billy must be doin' somethin' right, and his sold out show last Friday was one way to prove it. It started with an "I" and ended with a "U" and Billy had a feelin' we were feelin' it too. 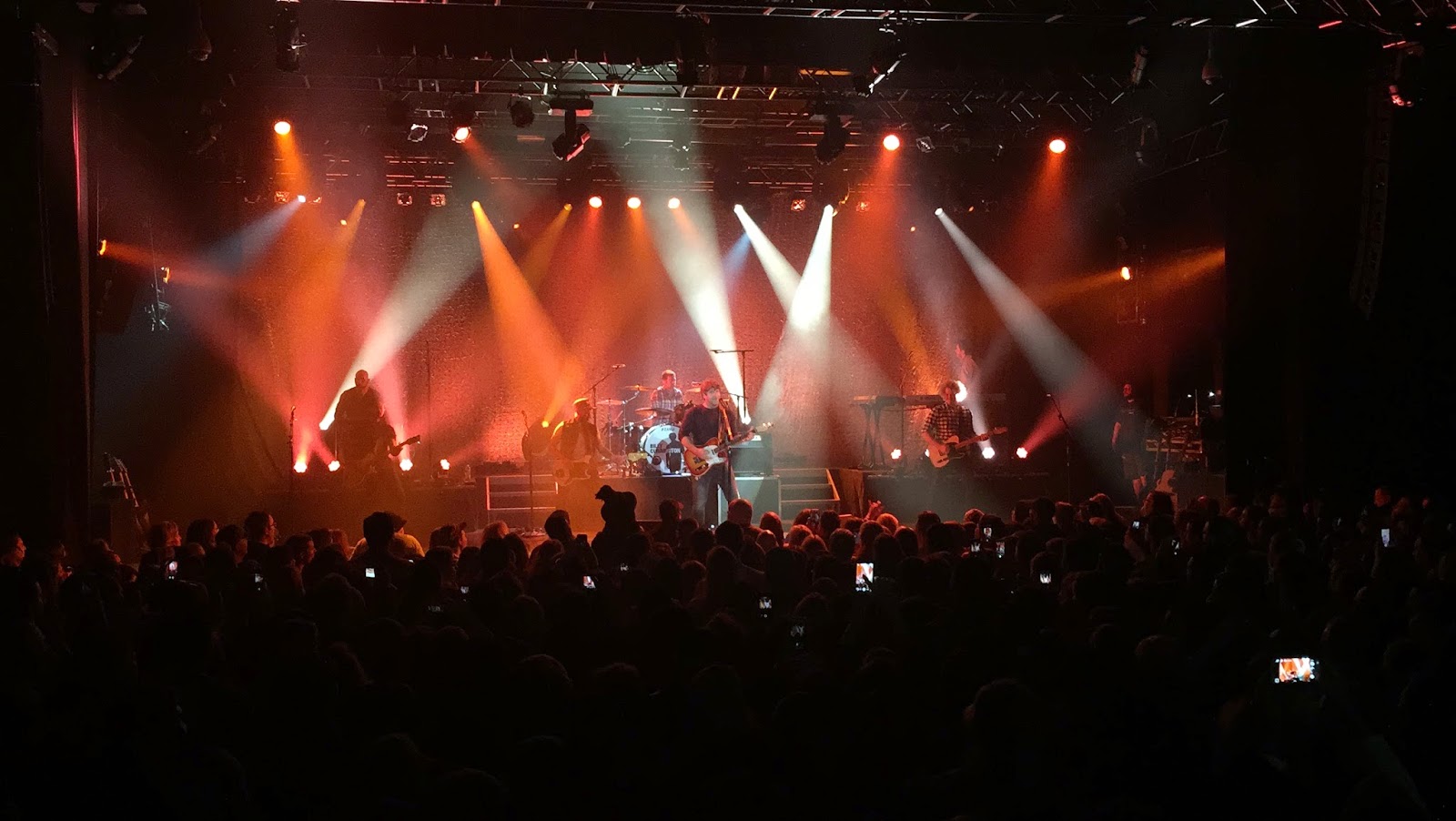 We Are Tonight, Don't It, People Are Crazy, Hey Girl... you name it, he played it. But if he was going to play anything, it had better be Good Directions - and it was clear that the entire audience agreed. Who needs backup singers when you've got two thousand country music fans singing along to every word?

To sum the night up, God is great. Beer is good. And people are crazy.

But really... We found a floor and we danced on it. We were tonight. We had lots of feelin's. We were pretty good at drinkin' beer. And yes, we enjoyed ourselves. Everyone was having fun and really, what more could you want from a concert? The only complaint I have is that it wasn't near long enough (and not just because I never wanted it to end). He let us down easy just before 10pm and only came out for a few more for the encore. It was like one minute he was telling us he was pretty good at drinking beer and the next we were watching him disappear into a cloud of dust. Sigh...

On another note - Have you ever instantly connected to an artist after only hearing them perform just once? Well, that's exactly why I must mention the incredible opener that evening, Kelsea Ballerini. This was my first time hearing her live (and honestly the first time hearing more than one of her songs). All I have to say is... She. Killed. It. Her current hit is Love Me Like You Mean It, and if you're wondering, yes, she can talk the talk and walk it. My favorite that night was a song where she compares her pain to wearing stilettos... even though they may hurt, you keep your head up high, putting on a show. All of her lyrics are so unbelievably honest and relatable. And the woman's only twenty-one! 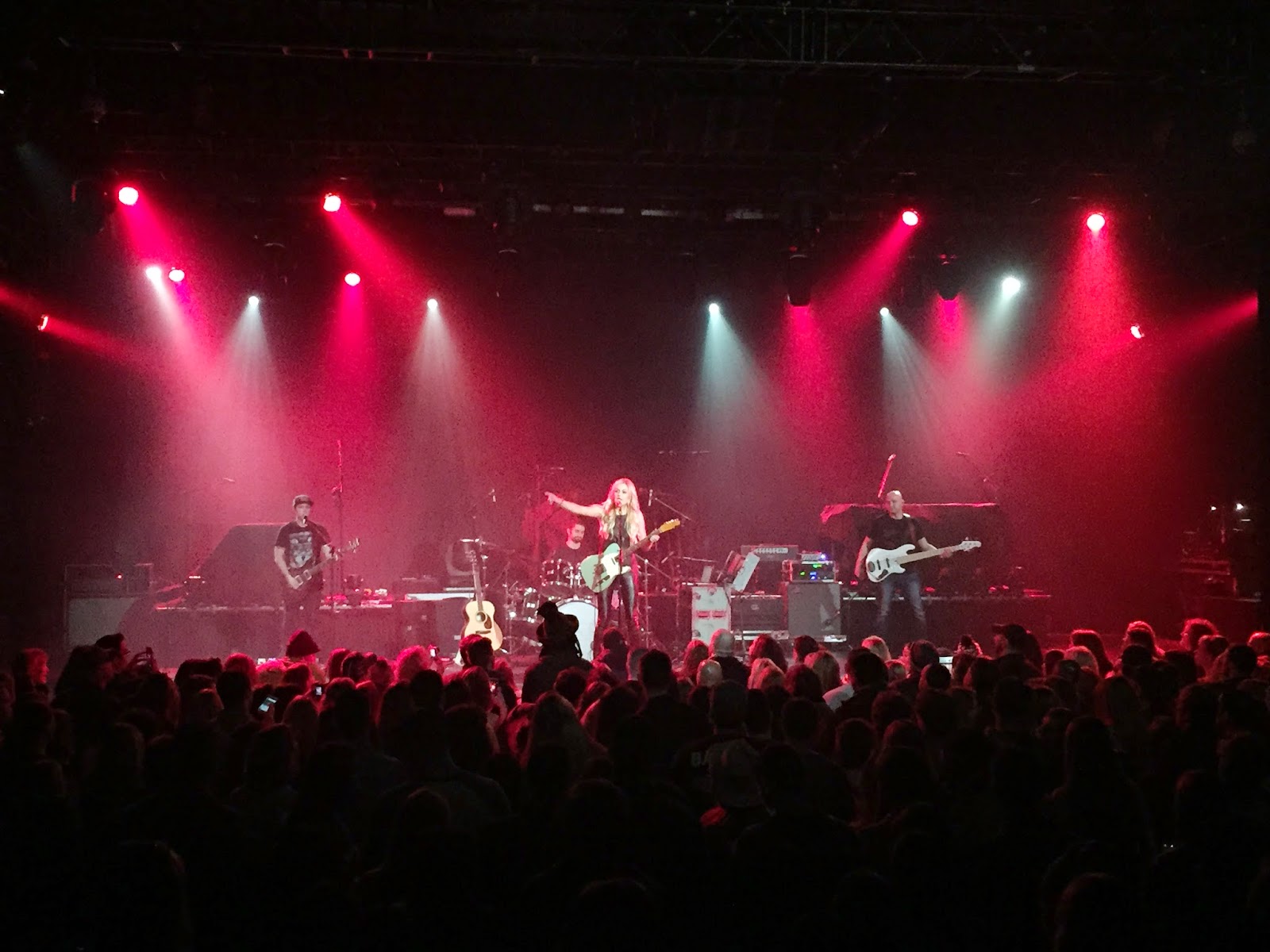 I met her after the concert and she's just as awesome in person as she is on the stage. Did I mention Taylor Swift loves her too? Okay, let me stop because I could go on about this girl forever! I am so excited to follow her journey. She's going places. If you haven't heard of her, you need to go listen. Unfortunately not all of her music is up on Spotify, but there's more on YouTube.

Kelsea and Billy, thanks for the fabulous night. It's good to know New York City can feel a little more "country" sometimes. In the words of the man himself, thank God for good directions, and turnip greens.

Enjoy yourself, let it all hang out
And you'll know exactly what I'm talkin' about
If you come on over without a doubt
You'll enjoy yourself

Because There's No Such Thing As "Too Many Concerts"

With so many (but still not enough) shows coming up in the NYC area, we could all use a little discount or free show. Honestly, there's just too much month at the end of the money. So, in order to ease the pain (kind of) I've gathered links to all of the current contests and discount codes out there. I'll continue to update as I find them, but jump on these while you can! Feel free to share below if you know of any more! 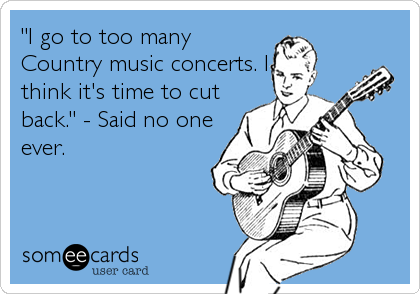 Taste of Country Music Festival - $10 off with code: SUMMER10

All gone, oh, heaven only knows.
All gone, oh, where on earth it goes,
But it sure goes.
Well, sometimes I think it blows away.

Who Wants a Little Taste of Country this Summer? 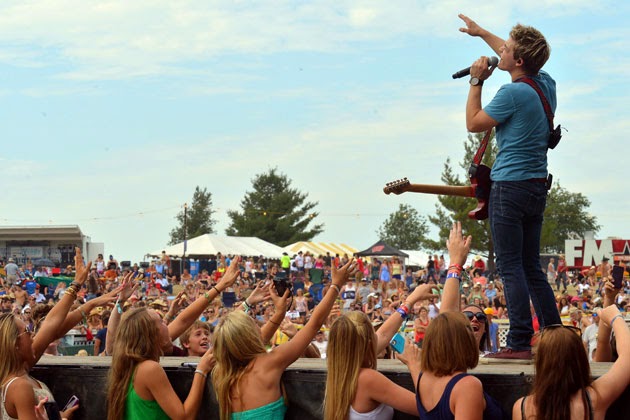 The 3rd Annual Taste of Country Music Festival will be held June 12-14, 2015 at Hunter Mountain Resort (Hunter, NY) in the Great Northern Catskills of Greene County. All of the details are here.

If you're reading this, you're obviously interested, or maybe you just came to drink (we're all just drunk Americans after all). But if you're looking for a little bit of everything, Keith, Toby and the rest of the artists have you covered. And Tim? Well, Tim's just there to see you smile (and I know you will).

Shania Twain Is Still The One 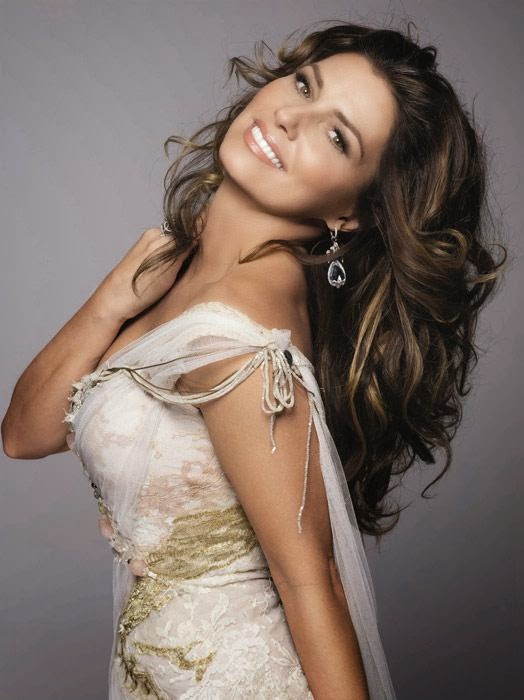 No, you're not dreamin' or stupid. Shania is still going strong, but apparently not for long. She just announced her LAST TOUR EVER and I'm happy (but also a little sad) to share that she's got three stops in our area. No matter what kind of day you were having before this, it can only go up from here :)

I've had Shania on Spotify ALL day (highly recommend doing the same) and I can't help but think back to my middle school days when I was a dancer (short-lived, but still happened) and wanted so badly to be a part of the older girls' group so I could dance to Man! I Feel Like A Woman. I still remember a lot of the moves (from watching, obv) and you better believe that I WILL be testing a few of them out at the concert. After all, you only live once.

In case you're suffering from a little memory loss, let me make it clear to you, my dear:
You're welcome for the sweet vids. Now, for the dates:

Presale tickets will be available starting 3/10, but general tickets go on sale to the public 3/13 at 10am. If you wanna make some noise and really raise your voice, then get to this show! In the words of the lovely lady herself, don't be stupid. You can betcha bottom dollar I certainly won't be.